A look at what has happened so far in the competition,
and a glimpse of what’s ahead.

Keep scrolling for a complete look at the current leader board for Gelato Festival America.

THE 2019 TOUR  OF GELATO FESTIVAL AMERICA has come to an end, and we’re going to tell you all you need to know about what’s already transpired in the competition and what you can expect moving forward. 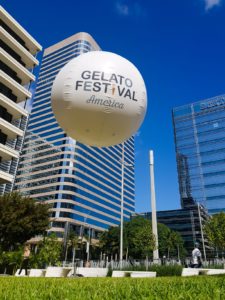 Gelato Festival touched down in the America’s in the Summer of 2017 and began to set the stage for local artisans to begin their journey to the biggest International Gelato competition, Gelato World Masters. That year we stopped in four different cities, and by the end of November, gained the first four competitors for the 2019 Semi Finals: Gianluigi Dellaccio of Washington D.C., Maurizio Melani of Valencia Spain , Walter Bergamaschi of Phoenix, Arizona, and Eugenia Sardelli of Tuscany, Italy.

The competition continued in 2018 as we completed an additional seven competitions. The competition toured throughout the US and stopped in cities on both the east coast and the west coast. Seven competitors were added to the 2019 Semifinals line-up, closing the first round of competitions on a local scale: Giacomo d’Alessandro of New York New York, Bella Gelateria of British Colombia, Canada, Maria Liliana Biondo of Miami, Florida, Diego Comparin of Dallas, Texas, Mike Guerriero of Montclair, New Jersey, Daniela Zomparelli of Toronto, Canada, and Nazario Mechionda of Tucson, Arizona. 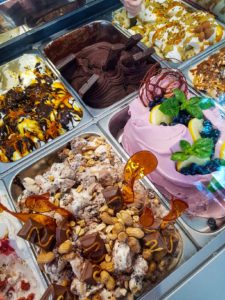 In March 2019 these 11 competitors came to the competition even more determined to win against their peers at the national level as the stakes rose even higher. In the end Mike Guerriero was crowned Gelato Champion and Diego Comparin won second place at the semi-finals. Both will move on to the Gelato World Masters’ 2021 competition in Italy. Should something unfortunate transpire for either one of these  individuals, Maria Liliana Biondo, who one third place, will replace them at the international level.

The competition for the single remaining spot at Gelato World Masters began this year in June and ended in October. Fabrizio Fenu of Cagliari, Italy, Angelo Lollino from Chicago, Illinois, Savannah G. Lee of San Francisco, California, Stefano Mosi from British Colombia, Canada are the 2019 Gelato Festival America’s winners who are moving on to compete at the 2021 Semi Finals at the national level.

The competition is fierce, but it isn’t over yet. If you’re interested in competing on a local level during the 2020 season, click this link to find out how you can place yourself on the leader board for Gelato Festival.

To those of you who are determined to compete, good luck. And for the rest of us gelato fans, happy eating!