Because the Tradition of Simple Indulgence Never Gets Old

Everyone’s palate craves different flavors, but there are some flavors that have been around for centuries and remain popular no matter the crowd or the season. These “traditional” flavors can be found at gelato shops across the country and even throughout the world. 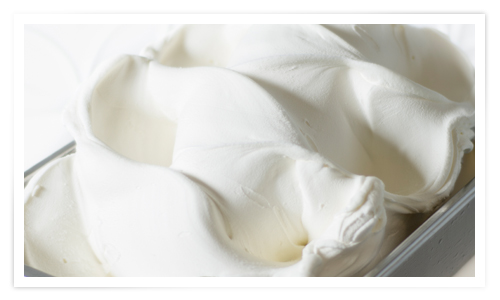 A cream flavor takes on the taste of its dairy element, such as cream, milk or egg, depending on the ingredients used in the mix. While the cream flavor provides a great neutral taste, it really works best when highlighting another flavor ingredient or a topping. This flavor is also sometimes called custard, which is commonly defined as a dessert or sauce that is a mix of milk or cream, and eggs that thickens as the eggs cook. This traditional flavor is especially popular in Italy and worth a try! Because there are differences in Italy and in the U.S. regarding the way milk and cream are pasteurized, the cream or custard flavor may vary by region. 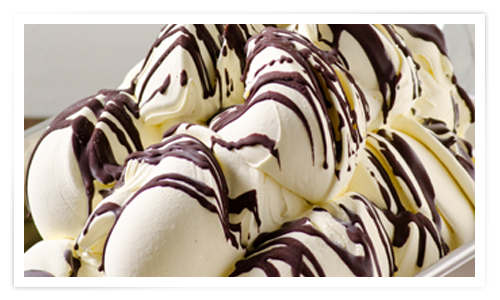 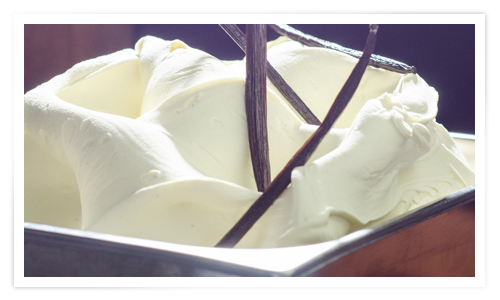 Who says vanilla has to be boring? This traditional flavor is anything but! By using different types of vanilla beans, gelato makers can create different levels of intensity and color. Natural vanilla of a high-quality gives a brown or yellow color to gelato, but gelato that has less intense flavoring is whiter in color. Popular types of vanilla include Madagascar, Mexican and Tahitian beans, but Madagascar produces more than half of the world’s vanilla. Vanilla, the second most expensive spice after saffron, remains the most popular flavor of all time. 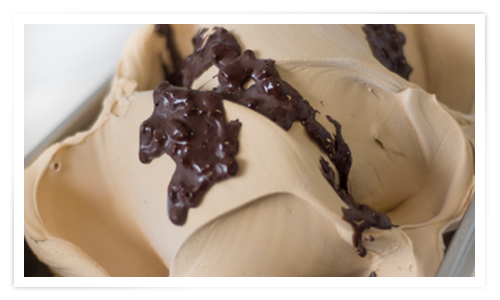 Vanilla may be a universal favorite flavor, but chocolate comes in at a close second! Many of the chocolate products consumed are produced from the seed of the cacao tree and combined with sugar. Milk chocolate, a traditional flavor, additionally contains milk powder or condensed milk. Gelato makers experiment with all types of chocolate, including milk, dark and white, but milk chocolate remains an essential flavor to any menu. If you’re one of the many chocolate-lovers in the world, don’t miss the opportunity to try one of the many chocolate gelatos. 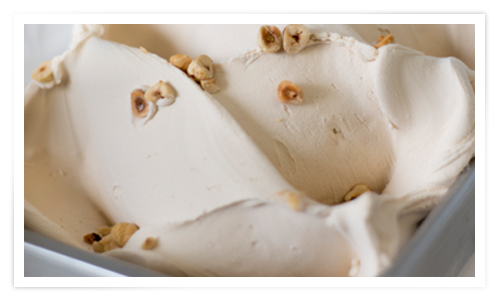 The traditional flavor of hazelnut comes from the nuts of the Common Hazel plant. Hazelnut flavoring is often combined with chocolate, but it can be enjoyed just as much on its own! Some hazelnuts are produced in the north-western part of the U.S. but the traditional hazelnut flavor comes from the nuts of the Piemonte and Regina regions of Italy. Hazelnut gelato is not one to be missed. 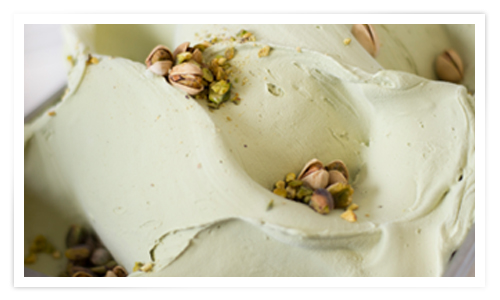 When you think pistachio, do you think green? Some ice cream and gelato makers use natural colorings, but different flavorings and intensities produce gelato that can range from off-white to green in coloring. For those who enjoy the intensity of the traditional pistachio flavor, gelato makers can use 100% pure pistachios in their gelato. For those who enjoy a less intense pistachio taste, the flavoring can be combined with other ingredients, such as almond oil. Pistachio nuts are produced in different parts of the world, but some of the best used in traditional gelato come from the Sicilian region of Italy. 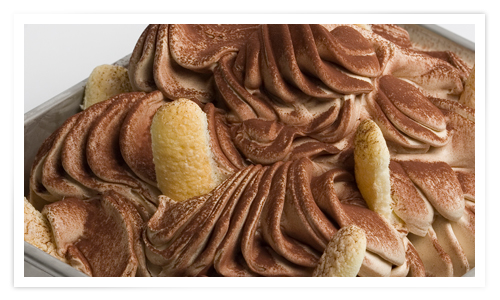 One of the most popular Italian desserts is turned into a frozen delight when you try tiramisu flavored gelato. The name tiramisu is often translated figuratively as “pull me up” or “cheer me up” in Italian, in reference to the effects of sugar and espresso. This new traditional flavor includes hints of all the ingredients typical to the dessert, including ladyfingers, cocoa, espresso, mascarpone and (sometimes) brandy. Whether your cup of gelato includes the traditional tastes of tiramisu or is a new creation by an innovative gelato maker inspired by tiramisu, you’re certain to be “cheered up!” 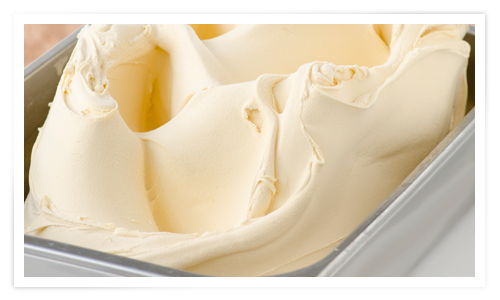 Zabajone is a traditional Italian dessert, but zabajone gelato is one of the new traditional flavors. Thought to be invented by the Franciscan Monk Pascquele de Baylon during the sixteenth century, the dessert is made with eggs, sugar and Marsala wine. Gelato makers use zabajone flavoring or a combination of cream and Marsala to obtain the same traditional taste, with a new frozen twist. The only thing needed to make this gelato better? A spoon!

This isn’t your typical yogurt, but don’t be so fast to count it out! Gelato and frozen yogurt shops carry different versions of this popular taste, but yogurt gelato is a new traditional flavor. Yogurt gelato has the tangy taste of yogurt, with the cool and smooth characteristics of gelato. It sometimes even carries the slight taste of citrus. Some gelato and frozen yogurt makers, in compliance with state regulations, add live cultures and probiotics to their yogurt for added benefits any time of day. Yogurt flavored frozen desserts are just beginning to find their way into U.S. gelato shops, but have found great success in popular frozen yogurt chains, especially on the east and west coasts. In fact, the unique flavor has been referenced as addictive a few times and this is one addiction definitely worth trying!

In addition to the traditional gelato flavors, there are several flavors that are more “modern,” but still embody the high-quality and popularity characteristics that the original traditional flavors represent. Some of these flavors are more inherently Italian than others, but all can be found in gelato shops worldwide.

Traditionally a mid-summer crop, new technology allows raspberries to now be grown year-round. Once harvested, raspberries can be sold fresh or processed as a puree, juice or dried. While fresh raspberries are a great addition to raspberry gelato, using frozen or pureed raspberries can also be used. Raspberry gelato offers a refreshing treat, great at any time of day. 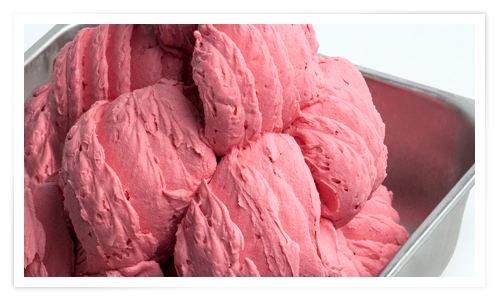 Fragola, fraise and fresa – do you speak strawberry? The words for strawberry are similar in Italian, French and Spanish, but the gelato can taste different depending on the types of strawberries used. The strawberry is one berry that has its seeds on the outside, but a pleasant, juicy taste on the inside. This traditional flavor is often enhanced with fresh, frozen or pureed strawberries, or a piece of shortcake! 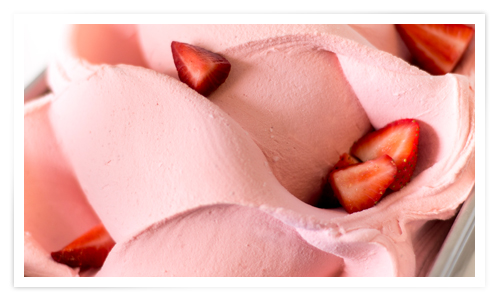 Whether you like peach smoothies, peach rings or just peaches, peach flavored gelato is a fresh, yet traditional flavor. Peaches can be only be grown in limited areas because of the climate requirements, but similar to many fruits, gelato makers can use frozen or pureed peaches to supplement fresh peaches in wintery months. The peach often plays an important part in Chinese tradition, symbolizing long life. Peach gelato is a light, airy flavor that is just peachy-keen! 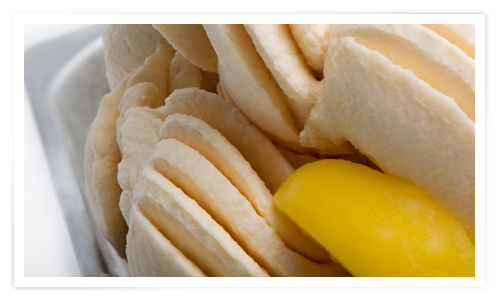 The traditional flavor of lemon, when referring to frozen desserts, is often synonymous with Italian ice, but a creamy and smooth gelato can be made with milk or water, both which showcase the sweet and tart taste. Similar to gelato, which dates back to ancient roman times, lemons were introduced in southern Italy in the first century and some of the most refreshing lemons still come from there today. This refreshing lemon flavor is so popular that gelato makers have produced delightful combinations, such as lemon-line gelato, and limoncello, which highlights the taste of the similarly-named liqueur made from lemon rind. 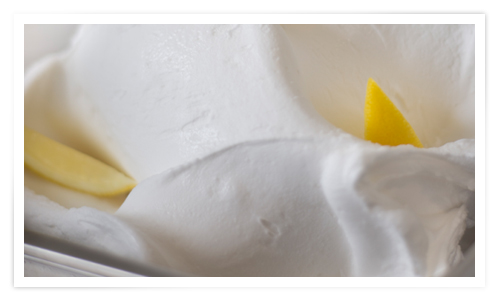 Amarena cherries are small, slightly sour cherries grown in Italy. Available all year-round, these cherries are often combined with sugar and used as a topping or sauce. Amarena gelato is a new traditional flavor, which can be made with milk or water, and isn’t just for the cherry-lover! 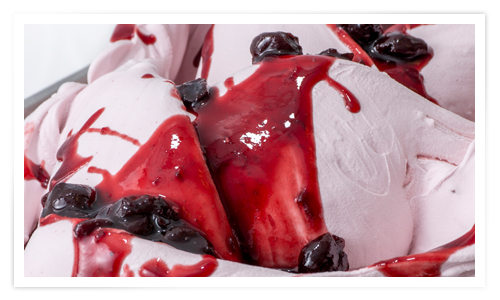 Sweet and juicy, with a unique almost peach-like taste, this fruit is now considered a “superfruit” and the perfect addition to the list of new traditional flavors. Mango has recently become a favorite flavor in gelato shops across the country. The fruit is sometimes difficult to work with, but frozen mango can really add intensity to anyone’s gelato. The flavor is airy and extremely refreshing, reminiscent of a breezy summer day. 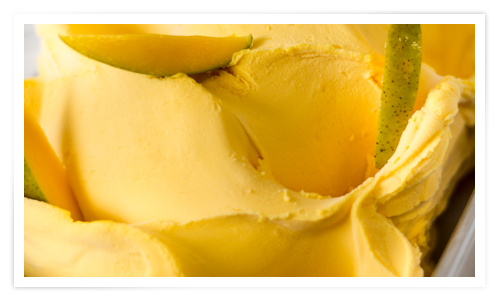 Need a new flavor to go bananas for? The U.S. is one of the most dominant buyers of bananas in the world, so it’s no wonder that banana gelato is a new traditional flavor. The fiber and potassium give you just one more reason to try this tropical flavor, which is typically made with water (known as a sorbetto), and great for any season. 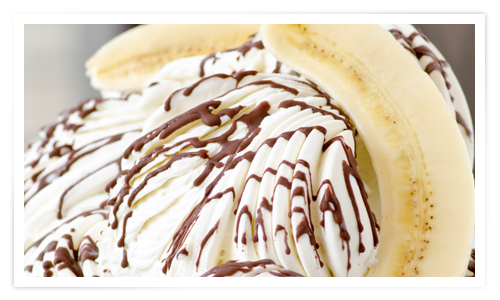 In English, the name “pineapple” is recorded as coming from its similarity to a pine cone. It may have a similar look, but this new traditional flavor has a tropical taste that can’t compare. The flavor is so intense that you can add fresh pineapple or eat as is. In many other cultures, the pineapple has become associated with the concept of welcome and hospitality. Next time you stop in your local gelato shop, you’ll notice that the pineapple is welcoming you to try it! 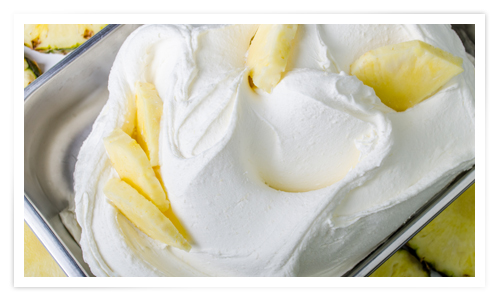