The Best Gelato in DC is… 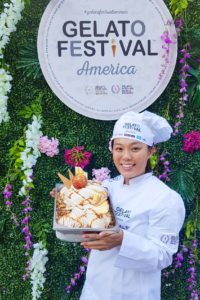 Monday, September 9, 2019 — Gelato Festival America, now in its third year, celebrated its return to City Market at O Street in Washington, D.C. The mission of Gelato Festival America is to spread the culture of artisanal gelato throughout the United States through a prestigious com. The winner of the contest for best flavor at this Festival was The All-American, presented by Savannah G. Lee of Savannah’s Gelato Kitchen in San Francisco, CA. The local area competitors included Hiba & Hiba of Bluenoon in DC, Mike Mullinix of Mike’s Gelato in Maryland, and Theresa Black of Amore Congelato in Virginia.

– First Place winner of the Washington DC festival, Savannah G. Lee (@Savannahs_Gelato_Kitchen), received a beautiful medal by Florentine goldsmith Paolo Penko. The All-American flavor was a hit with the Public Jury, composed of ticket-holding guests, as well as the Technical Jury of 12 professional judges. Interlaced with a tantalizing salted butterscotch drizzle, a gorgeous medley of home-baked cinnamon apples with layers of honey graham cracker crumbles await you in a perfect cheesecake setting. Topped with ribbons of buttery caramel and melted white chocolate, this tribute to the All-American apple pie was the apple of everyone’s eye. 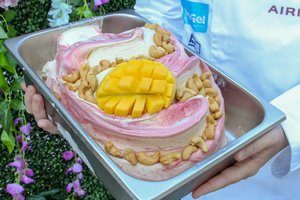 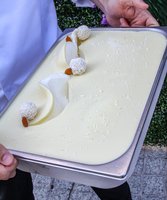 Held in collaboration with strategic partners Carpigiani Frozen Dessert University and Sigep – Italian Exhibition Group, Global Partner Air Italy, Main Sponsors PreGel and WhyGelato.com, and Technical Sponsor ISA, Gelato Festival Washington, D.C. 2019 has produced a winner to continue the competition and enter a flavor in Gelato Festival American Final 2020. It’s the World Cup of gelato, a journey with hundreds of trials and thousands of flavors over four years on five continents! The Washington DC stage competitors created and served more than two tons of gelato for thousands of guests over this weekend using cups by Packaging Sponsor Stanpac.

– Technical Jury: Piazza Navona, a flavor designed to pay homage to a gelateria in Italy, by Fabio & Giuseppe of Zerogradi Gelateria in Ambler, PA. The Technical Jury prize is awarded to the professional judging panel’s favorite flavor (with no consideration given to the popular vote by all ticket-holding guests). Each gelato is judged based on presentation, flavor, structure, creativity, and articulation.

– Popular Jury: Sweet Potato Casserole, a decadent sweet potato gelato topped with a sweet nutty streusel and gooey toasted marshmallows, by Jason Corosanite of Particle Food Lab & Café Vine in Philidelphia, PA. The Popular Jury prize is awarded to the flavor that was preferred by the general admission guests (not counting the professional judging panel).

All fourteen Gelato Festival competitors for the 2019 Washington DC stage.

– The Gela-to-go Award: There was a tie between Pistachio Baklava, recalling the streets of Damascus, Syria to bring you a rich, decadent experience through dark honey, fragrant cinnamon, pistachio, and clove by Hiba & Hiba of Bluenoon in Washington, D.C., and Mango Raspberry Cashew, a bright, juicy mango gelato swirled with tart raspberry ribbon with layers of creamy cashew crunch to add a buttery, caramel accent to these tropical flavors by Lauren Tamm of Iorio’s Gelato in Kentwood, MI. The creators of both flavors each received a Gela-to-go Special Mention Certificate for selling the most pints of gelato for guests to take home.

– Kids Jury: The All-American, with a tantalizing salted butterscotch drizzle, a gorgeous medley of home-baked cinnamon apples, and layers of honey graham cracker crumbles won over the kids in a perfect cheesecake setting. Topped with ribbons of buttery caramel and melted white chocolate, by Savannah G. Lee of Savannah’s Gelato Kitchen in San Francisco, CA. Little jurors, both pre-selected and among the little guests of the Festival, tasted and scored all the competing flavors.

– Speed Cup Race by ISA: Ezequiel Gomez of Gelato Gourmet in Weston, FL served the most perfect cups of gelato in D.C., nine. It was a close call, but Sierra Georgia and Fabio Pilo claimed second and third place respectively. The top three each received an award to commemorate their placement. Sponsored by ISA, Speed Cup Race is about speed and the art of using the spatula to fill cups in the traditional Italian way. Each Gelato chef has 30 seconds to serve as many perfect cups of Gelato as possible. 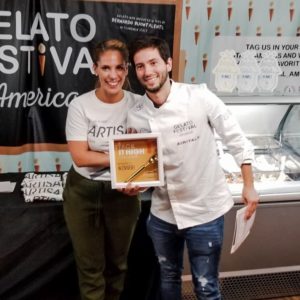 – Stack It High by PreGel: Ezequiel Gomez of Gelato Gourmet in Weston, FL stacked an impressive 20 scoops of gelato into a single cup to win the challenge and take home the Golden PreGel Scooper. Sponsored by PreGel, each Gelato Chef was given 30 seconds to stack as many scoops of gelato as possible into a cup.
This weekend was the culmination of a fantastic second Gelato Festival at the City Market at O Street where thousands of people enjoyed authentic Italian gelato and voted for their favorites. Guests enjoyed demonstrations, contests and games, ceremonies and most importantly, tasting the artisanal gelato. Next up, the 2019 tour will bring Gelato Festival to LA, September 28 & 29.